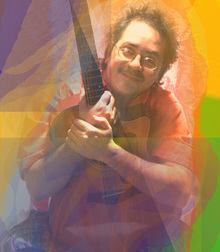 Daniel Arite (pronounced a-ree-tee) is a composer/guitarist and arranger whose influences range from Gregorian chant to folk, rock, world, classical, free jazz and beyond.  Moving from swinging chaotic improvs to celestial meditations,  electro acoustic sounds and a unique approach to multitracking contribute to his style. His music has been featured in venues around the US, on public radio and also on PBS. His guitar arrangements of traditional music, jazz, and original compositions are lush with textures and colors that reveal the beauty and versatility of the instrument and range from driving polyrhythmic dances to mesmerizing romantic serenades.
Dan is also a visual artist. His artwork is in galleries, private collections and in the collections of institutions. For more information on the visual art check out this link.
www.danielariteart.weebly.com